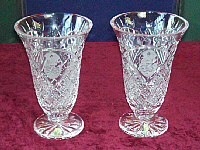 The Brendan Trophies and Brendan Shields will be presented to each of the operators of the two amateur radio stations which first establish two-way communication in the relevant category between the continents of Europe and America (North or South) within the Two Metre Amateur Band [a].  If a station has more than one operator at the time of the contact, then the award will be made jointly to those operators who can show that they contributed materially to the contact at that time.

The Awards will be presented on the unanimous decision of an honorary Awards Panel established by the IRTS comprising at least three people one of whom shall be designated as chairperson.  In the case of a member of the Panel leaving or being unable to act, for whatever reason, the remaining member(s) will make a recommendation for a replacement.  However the final decision on the composition of this Panel rests with the Committee of the IRTS.  In the case of a Claim in which one or more of the members of the Panel is closely involved, the member(s) so involved will stand down and replacement appointments will be made.  When considering a Claim for the Trophies, the Panel may co-opt whomsoever it chooses in order to reach an informed decision.

3.  Location of the Stations: 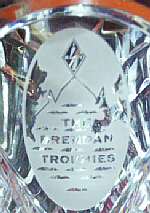 Operators applying for the Transmitting Awards must have held a current Amateur Radio Licence provided by their respective authority at the time of the contact, and have operated within the provisions of their licence during the contact, particularly in regard to frequency and power limitations.  Any information regarding the stations demanded by the Awards Panel must be provided and if required the stations must be made available for inspection by nominated representative(s) of the Awards Panel.

There are three categories of Award:

In addition the Brendan Medal, a triennial Medal will be awarded to the group or individual who, in the opinion of the Awarding Committee, has contributed most to the promotion of propagation studies on the trans Atlantic 2 metre path.

The definition of a Contact is conventional, i.e. two way communication will be deemed to be established when each station has:

a) received both call signs in full

c) received confirmation (R or Roger) that the other station has satisfied above conditions (a) and (b).

This Information must be exchanged within a maximum period of four hours, after which the contact must be recommenced.  The contact must be made via natural reflectors within the atmospheric mantle of the earth, which for these purposes may be taken as a distance of 1,000 km.  Thus man-made reflectors (aircraft, satellites, etc.) as well as EME are excluded.  The onus of providing proof of the contact satisfactory to the Panel rests on those involved.  The level of proof required by the Panel will depend on the circumstances involved.  For example, if the contact is the result of pre-arranged tests, then the Panel will expect a higher level of proof than if the contact were “random”, such as complete recordings of the signals from both sides.  If on the other hand, the contact is made spontaneously, the signed statements of both operators and witnesses on one or both sides may be acceptable.  All relevant facts will be taken into consideration when evaluating a claim, and the Panel will pursue whatever line of enquiry they choose to evaluate a claim.

Applications for the award must be made in writing to the Chairman of the Awards Panel within three calendar months of the contact being made, setting out clearly their evidence of a valid contact, and include a signed Declaration of Honesty and Operation within the true Spirit of Amateur Radio.  The Panel will make the claim public by providing details to the Amateur Radio press on both sides of the Atlantic, and invite relevant comments.  Any representation concerning the contact will be carefully considered before their decision is made.

For an award to be made, both stations must have satisfied the award conditions.  The decision on the validity of the contact within these rules rests solely with the appointed Awards Panel.  This Panel will make their decision on a claim for the award within one calendar year of the claim being received, and will make their reasons known in the event of a refusal to award the trophy.  However, they reserve the right not to enter into any correspondence subsequently to their decision.